For our Year 6 students this term it was truly a student-centred approach to learning when they were tasked with considering how new technologies could be harnessed to have a positive impact on society.

In a deep dive into Media, our Year 6 students were asked to address a societal issue and present a solution utilising innovative technology such as VR, AR, 360-degree video, interactive media or e-learning technologies to visually demonstrate their solution.

Diana wanted to answer the question: How might I encourage a positive body image in teenage girls? 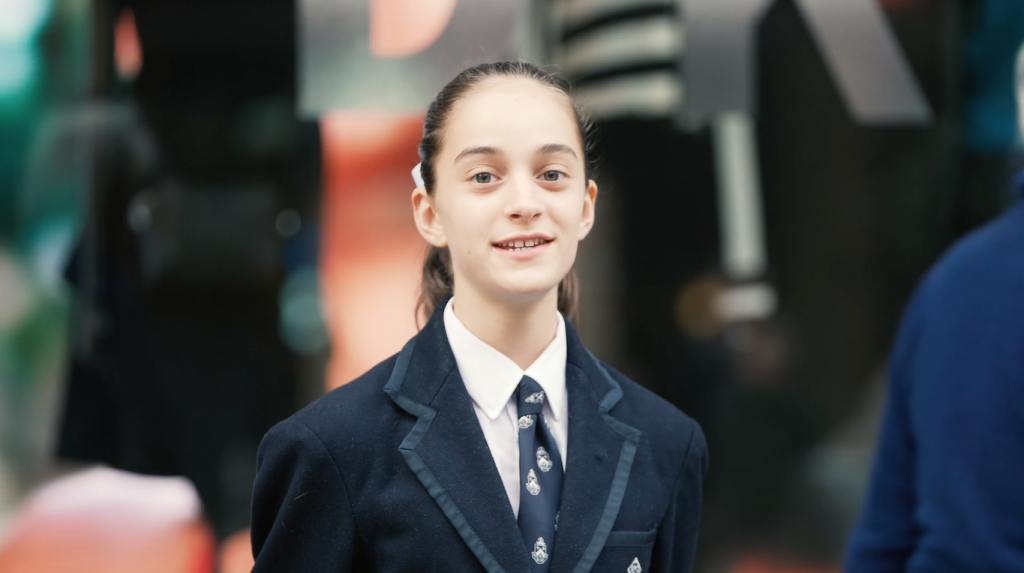 After scrolling social media, or flicking through magazines, Diana found she was genuinely concerned about the impact ‘perfect’ images were having upon teenage girls.

“A young teenage girl’s body image is influenced by what she views on social media, on the TV, and in magazines. Our identity with beauty is often influenced by celebrities that we perceive as role models,” Diana said.

“By showcasing these women in my media exhibition, I helped influence younger girls in being able to recognise how a positive self–body image is demonstrated.”
Diana, Year 6

In answer to the growing issue that effects many young women, Diana decided to create a motivational video to demonstrate to young people the importance of positive role models. As a part of her project, she selected to interview Alex Pendlebury, Laura Heron, Kate Sheahan, and Esma Voloder, women who are actively promoting a positive self-body image with their online presence.

“By showcasing these women in my media exhibition, I helped influence younger girls in being able to recognise how a positive self–body image is demonstrated. People who have body image concerns feel worried, stressed and exceptionally unhappy about their appearance, weight and shape. Teenage girls are at the highest risk for body dissatisfaction as their social media usage is at its maximum. Instagram, Snapchat and other social media vehicles are the perfect outlet for celebrities and other influencers to portray themselves as ‘perfect’. As we look at these images, we are mesmerised by how beautiful and natural looking these images are, but what is less obvious is the constant reshooting and extensive editing undertaken in order to capture the one perfect look,” said Diana.

As Diana did more research into the growing issue, she wanted to highlight those who used social media in a more positive, real and healthy way in her video.

“Alex Pendlebury displays a positive self–body image on social media by posting photos of nutritious food and exercise while being natural in the photos. Kate Sheahan is part of the AFLW Richmond team. She is also a fox footy journalist, and a tennis coach. Kate Sheahan is inspirational because she promotes women’s health and demonstrates that a female can break into a male dominated sport such as the AFL. Laura Heron is a current year 12 student and she is also a senior ballet dancer at my ballet school. She focuses on her studies, she focuses on her artwork, and on her dancing, she inspires me. Esma Voloder is Miss World Australia 2017. Esma talks about how girls have to be well rounded individuals that represent a positive influence to their community,” says Diana.

Working around the busy schedules of the women involved in the video as well as her own, Diana had to work within tight deadlines and time restrains and ensure her goal was clear and organised and in an achievable manner. The finished product is an impressive feat that really hits home on how we can all strive to do better with our online presence.

“The most interesting part of my project was the consistent and inspiring message shining through the answers voiced by my interviewees. I found these women to be knowledgeable, intelligent and positive in their message, that all young women should believe in themselves and not feel pressured to be like anyone else except themselves,” Diana said.