The actress, writer, director and producer graduated from New York’s American Academy of Dramatic Arts (The Academy) in 2020. Maddy has been building up her resume in the early stages of her career with various roles. She has added Gossip Girl, The Train, GORP, Trance and Jolly Roger to her list of roles, which also includes Nicolas Cage’s Knowing (2009), a film she featured in at the age of 9.

Despite the onset of the coronavirus pandemic, 2020 was still a busy year for Maddy, who is based in New York City and Melbourne. In that year, she graduated from The Academy, started her production company – Quilt Arts – and launched her podcast Lying for a Living.

Maddy is the creative director of her production company, which is based in New York. Quilt Arts specializes in independent theatre, films and multimedia. Its team is a collective of artists hailing from four different continents, brought together through a desire to explore the amalgamation of cultures and artistic expressions from around the world. They are working to showcase new and exciting voices that their multinational team has to offer.

Normally, Maddy is in front of a camera or on stage with the spotlight on her. However, we are now shining the lights on her through our new Alumnae Spotlight series. She is the first cab off the rank in this new series, which highlights the amazing work and achievements of our Young OGs across Australia and the world.

Maddy tells us about the moment she knew she wanted to be an actress, the beginning of her production company and what is next for her. 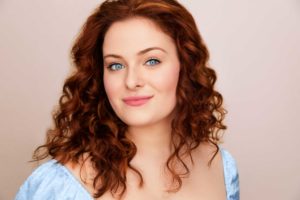 MGGS: Tell us about how you first got into the Arts, was this something you always knew you wanted to do?

MG: I often think about how I ended up in acting, trying to concoct some excellent and exciting story where lightning struck, time stopped, and I just knew. But, in truth, nothing quite so mesmerising happened. When I was very small, my brother loved acting and, as twins, where he went I would find myself dragged along too.

My first foray into “The Arts” was at kindergarten, where I played the pivotal role of angel number 3 in the nativity play. I was blissfully ignorant to the fact I was standing in front of baby Jesus, oops. There wasn’t anything particular that clicked at the time but, from then on, I embraced every opportunity to be involved in drama.

I was incredibly fortunate throughout my primary and secondary schooling to be presented with an abundance of opportunities to act and step on stage.

This really cultivated my interest, turning it from participation to a passion. You get to step into a whole new world with every script you read, stepping inside a thousand pairs of shoes. For someone who grew up reading Harry Potter and all manner of magical stories, what an enticing delight it was to be able to live those tales, too.

What has been a standout moment in your career? Any memorable films, tv or theatre productions you’d like to share your experience with?

I’m still in the very early stages of my career, so I hope that all those exciting times lie ahead, instead of behind me. That being said, a moment that absolutely lit me on fire was the first time I went to Steiner Studios. Steiner is the largest Film and TV production complex outside Hollywood.

It has been home to productions such as Men In Black 3, The Producers, Boardwalk Empire, Enchanted, Gossip Girl, and Burn After Reading. It’s a mammoth complex, and you could really say that’s where the magic happens.

It seems small, but it really cemented for me that I wasn’t a little kid anymore, pretending to accept an award or dreaming of being in front of a camera, I was lucky enough to call that my reality.

What inspired you to start your production company?

After finishing my studies in 2020, there were limited employment options. With the pandemic raging around us and film and TV production forced to close in NYC, my friends and I spent a lot of time stuck inside.

Every time a casting notice came my way, I was elated at the possibilities it could hold, and often dejected when I read the character descriptions or dialogue. “Tall, busty blonde, not super smart, but always smiling”. Really, is that as good as it gets? Here we are in 2020 and female characters are still stuck in the 1950s.

We all had stories to share, and wanted to create a platform to elevate other unheard and unseen ideas.

Soon, my friends and I realised we were all sharing similar frustrations. Additionally, as the year stretched on and Visa deadlines loomed, we decided we weren’t going to wait for someone else to give us work, we were going to create it for ourselves.

Putting our heads together to create Quilt was liberating, we all had stories to share, and wanted to create a platform to elevate other unheard and unseen ideas.

What would be three pieces of advice that you could offer anyone wanting to follow a career in acting?

These are some pieces of advice that have been given to me over the past couple of years:

What do you love most about what you do?

I love so many things about acting.  Being on set is genuinely when I feel my happiest. Filmmaking and theatre are far less of a singular pursuit and more of a team sport. Working with other people to bring a singular vision to life is incredibly rewarding.

Additionally, I love the problem-solving aspect of filmmaking. How do you take 90 pages of text and create something like Dune? An audio-visual spectacle that completely transports you to another universe? I love being a part of that process.

I also love never really having to answer the question “what do you want to be when you grow up?” I get to be something different every time I pick up a new script, a constant new adventure.

I get to be something different every time I pick up a new script, a constant new adventure.

What was your favourite aspect of attending MGGS?

I’m very thankful for the secondary education I received at MGGS. One of the best things MGGS gave me was a sense of community. Whether it be house events, plays, choirs, sports teams or any number of other things, there was always something to be a part of.

Since graduating, I have loved that continued sense of togetherness. Even when I was studying in New York, on the other side of the world, I still managed to be visited by some of my old teachers and catch up with friends, it was lovely.

What are your plans for 2022 and beyond?

Who knows what the future may hold! I am so excited to see where this year takes me. I’m undertaking some further study this year and heading back overseas to continue the adventure. Keep your eyes peeled, and you just might see me on a screen soon.

We are excited to see what is next for Maddy and Quilt Arts. You can learn more about Maddy at her website and follow what she is up to on her social media.