The Committee of the Old Grammarians in partnership with Melbourne Girls Grammar would like to thank our community for helping to complete this project in honour of past Principal, DJ Ross.

In 2019, the Old Grammarians Committee commissioned a chapel window to commemorate the life and service of Dorothy Jean Ross, Principal from 1939 – 1955. This continued the tradition of creating windows for the Chapel.

Three other windows for the Chapel have been donated by the Old Grammarians in previous years. The first was donated in 1967, commemorating the creation of the Chapel of St Luke – the large blue west window was created behind the choir stalls, designed to perfectly capture the setting sun each afternoon.

As the School moved forward with the initial meetings with David in April 2019, in June he was able to discuss his plans with Principal, Dr Toni Meath. In November, Judy Wilkinson (Rutty, 1965) and Venetia Patchett (Streeton, 1965) visited David ‘s studio in Flinders to view the progress and get a glimpse of how it would come together in the chapel window.

Dorothy J. Ross – widely known and respected Headmistress of Melbourne Church of England Girls’ Grammar School (Merton Hall) from 1938–1955 – was an icon in female education. DJ as she was affectionately known, or Miss Ross to her students, held a profound conviction that education was the key to a better world. She had a vitality, energy and passion for what she believed in. It is this vibrancy and belief in women that she passed onto many others during her time at the School.

We are very grateful for the support of donations for this project, particularly the generosity of those OGs who were students during Miss Ross’s time. This generosity is further proof of the way in which “her’ girls viewed their headmistress and the respect and gratitude they feel.

COVID-19 has made it impossible for us to hold a service at the moment to bless the window as we would have wished. This will have to wait until a later date. In the meantime, we hope you’ll enjoy some pictures of the spectacular finished product, along with some commentary from the artist, David Wright, on some of the key features of the window. 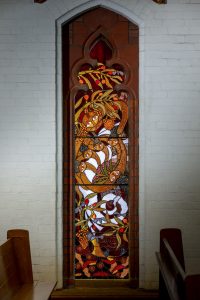 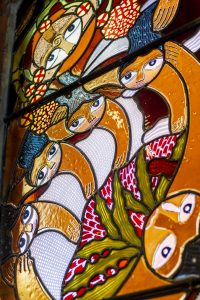 Mary Magdalen at the Tomb

The theme of the women coming to the tomb speaks of support and companionship in carrying out a difficult task. Through this, revelation of Christ’s resurrection comes to Mary Magdalen and she is tasked with carrying the ‘good news’. ​Mary Magdalen has her arms outstretched in support of the other women who have come to the tomb to carry out this onerous task​. The Aloe Vera would have been one of the herbs brought to the tomb for the anointing of the body. 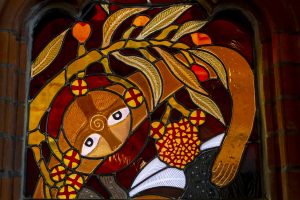 The Resurrection scene where the women come to the tomb to anoint Christ’s body with herbs and sweet smelling spices is incarnated in the Australian bush with its extraordinary colours and beautiful plants. ​The risen Christ who has appeared to Mary Magdalen in the garden has His arms outstretched in support of the women at the tomb. 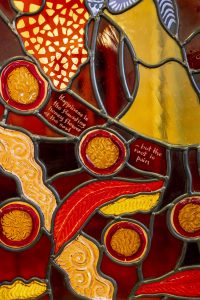 The fruit of the Quandong, scattered on the ground have a brain like texture and are emblematic of DJ’s quote, “Happiness is the flaunting honey flower of the soul, its roots in pain and its twin fruit knowledge and strength”.​ The roots of the Quandong are renowned for sharing nutrients with the roots of other plants, representing DJ’s emphasis on our need to support others in a sharing community. 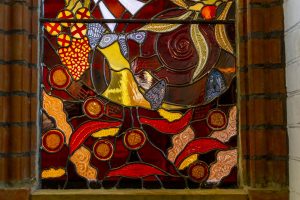 The women come to the tomb to find the burial shroud unrolled and empty, with an angel, symbolised by the feathers, at the head and foot of the shroud. The darker circular shape towards the bottom of the design which has an embedded spiral is the stone rolled away from the entrance to the tomb. The uniquely Australian tree, the Quandong or desert peach, has flowers that open in a cross-like manner, revealing the red of suffering and the pain of Crucifixion. 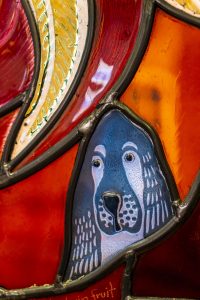 The moth has markings that when inverted and slightly transformed, could by those in the know be taken for a beloved companion. DJ Ross was always accompanied by her beloved spaniel so do not be surprised if one of the moths can mysteriously resemble a dog at times.

David Wright is one of the world’s leading glass artists. His work spans 40 years.

Since graduating in Architecture in the early 1970s David Wright has gained an international reputation for his unique style and glass working techniques, whereby the glass is layered and moulded in the kiln, giving a rich colour and texture to his work. He has taught and lectured throughout Australia and overseas.

In his research for this window, David found a wealth of knowledge in Barbara Falk’s book.

“I am indebted to Barbara Falk for her book on DJ Ross. DJ was an extraordinary woman, ahead of her time a “conservative revolutionary”. She embodied strong charismatic leadership, a great love for those under her care, both staff and students and at her core holding Christian values based on how we treat each other, how we act in our lives with compassion to others. This always trumped Christian ritual. Companionship held sway over competition and education was about the excitement of revelation. She was a distinguished botanist with an academic qualification that was relatively rare for a woman in that time. “Happiness is the flaunting honey flower, its roots in pain and its twin fruit knowledge and strength”. DJ Ross quoted in Falk’s book.”