Melbourne Girls Grammar is a progressive, contemporary and independent school, which has delivered an exceptional education for girls from Early Learning to Year 12 for nearly 130 years. 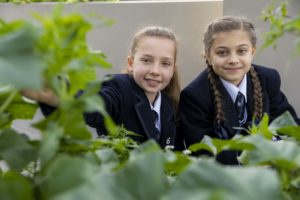 Our holistic learning programs are second to none, led by a team of exceptional educators who challenge and maximise the potential of each and every girl.

To educate is to make an intervention into the lives of others. When we intervene, we do so with certain assumptions about the value of what we are doing and why. Building students' capacity for future readiness is a moral-ethical learning endeavour and one that cannot be left to chance.
To achieve this, Melbourne Girls Grammar promotes a progressive, contemporary community of practice committed to providing personalised high quality curriculum, wellbeing and co-curricular programs that enable lifelong learning for every student. We are future focused and committed to inspiring our Grammarians and equipping them with the values, knowledge and skills to be ready to make their mark on the world.

Rich with history, achievement and tradition, Melbourne Girls Grammar continues to uphold strong Christian values laid out by its founders.

Immerse yourself in our history.

Melbourne Girls Grammar was established as an academic school for girls with well-qualified teaching staff, many of whom had university qualifications. Miss Emily Hensley (1893-1898) and Miss Alice Taylor (1893-1895) were the first headmistresses to nine students and one boarder.

Merton Hall, the undeniable heart of the School, was constructed.

The School became the first Anglican school for girls in Victoria, known simply as the Church of England Girls Grammar School.

The coat of arms and the motto, Nisi Dominus Frustra, were chosen. The Old Grammarians Society was formed.

The iconic Anderson Street gates, through which thousands of students have passed, were gifted to the School by the Old Grammarians.

The Morris sisters fostered the role of sport in girls’ lives, encouraged a love of music and drama, promoted science and languages and insisted on strong programs in English literature.

Miss Kathleen Gilman Jones (1916-1938) arrived at the School and, to date, is the longest-serving headmistress.

The School Hall was completed and provided the setting for the first rendition of the School Anthem, Nisi Dominus, composed by Dr A E Floyd.

Phelia Grimwade House, originally built in the 1880s, was acquired for its boarding facilities.

Miss Dorothy J Ross (1939-1955) took over as headmistress just as the School faced a major crisis — the 1942 wartime evacuation of the girls to Marysville.

The Ross era saw a greater involvement of students in their learning, and cooperating in groups. Girls were encouraged to think clearly and critically, to form judgments after careful reflection and to develop personal responsibility for their learning. This philosophy continues today.

Headmistress Miss Edith Mountain (1955-1975) promoted the importance of science education and a purpose-built Science and Library Centre was opened.

The spiritual heart of Melbourne Girls Grammar, the Chapel of St Luke, was consecrated in 1967. It was originally built as an Assembly Hall in 1917.

Miss Crone valued the central role of a multimedia resource centre and a new library was built in the heart of the School grounds. It was subsequently named in her honour. It included for the first time a dedicated archive repository.

The Early Learning Centre was opened at the Merton Hall campus and named in honour of Old Grammarian Barbara Tolson.

We have used new technology to our advantage since 1995, with digital educational programs woven throughout our learning experiences.

Principal Mrs Catherine Misson (2008-2018) oversaw the Merton Hall classrooms extensively renovated with up to date technology access in all classrooms.

Wildfell opened. Years 5 and 6 were brought from Morris Hall to the new building, which was designed to enhance the new and carefully planned curriculum design.

Morris Hall, now a Prep – Year 4 campus, underwent a total transformation, emerging as a building able to meet the demands of its new curriculum.

Construction on the Artemis Centre began. This gender-specific facility is the heart of our wellbeing program and will open in mid-2017.

The Artemis Centre was officially opened in September 2017, which embodies Melbourne Girls Grammar’s commitment to the wellbeing of girls.

As a school community we celebrated the School’s 125th Anniversary.

Catherine Misson completes her tenure as the 11th Principal of Melbourne Girls Grammar.

Beyond The Red Brick Walls

Through academic, civic, team and individual pathways, our girls develop valuable leadership skills. Performing local and global community service enables girls to experience the diversity of the world around them in real life situations and creates the foundations of knowledge they will carry with them into the next phase of their lives.

Each year, Melbourne Girls Grammar students are involved in a range of different community service projects. These opportunities are designed to promote a level of commitment to life and the broader community beyond the walls of the School.

The School’s Enterprise Program offers a variety of placements to students. Participation is encouraged in order to develop leadership skills, prompt personal growth, enrich a sense of community and personal philanthropy.

For example, students in Years 9 and 10 are recognised for their contribution to community service activities through the Field Award, designed for girls to reflect on and respond to our School’s holistic expectations.

When our girls graduate, they establish themselves as pioneers in various fields, embarking on a myriad of experiences, careers and endeavours.

As capable, resilient and exceptional women, the breadth of their achievements knows no bounds.