This year’s Speech Night at the Melbourne Town Hall, was an evening of celebration for the countless achievements of our girls. Alongside this commemoration, we had the privilege of hearing from highly acclaimed investigative journalist and author Caroline Overington, who shared insights into her novel Last Woman Hanged, reflecting on the early suffragette movement in Australia.

Caroline Overington is one of Australia’s most successful writers and journalists. She has a background in investigative journalism, where she has worked for The Age, The Sydney Morning Herald, The Australian, and The Australian Women’s Weekly. She is also a highly commended author, having written 12 novels.

Caroline’s enthralling speech, which is shared below, had a monumental effect on all present, and inspired our girls to speak freely and stand up for what is right.

My name is Caroline Overington. I’m a writer. I’m grateful for the opportunity to speak to you today.

I am not a Grammar old girl. I went to high school in a town called Melton. It’s on the road out to the goldfields, half way to Ballarat. We lived in a little weatherboard house near the railway station.

There were 12 students in my HSC year. It was a different kind of school from this one: we called the teachers by their first names. There were no uniforms. The HSC kids had their own demountable in the school yard and on the last day, we were allowed to pour wet concrete near the front steps, and write our names in it. The teachers smoked with us.

It was a different time.

My family was not wealthy but nor were we poor: we were proudly working class, as many of your families will be. We may not have had a big house or a new car, but there was pride in having worked for what we did have, and I understood that I was lucky because my grandparents had arrived in Australia after the Second World War, and now we were safe.

They felt so lucky, and I did, too.

My favourite book is called Last Woman Hanged, and it’s about a woman named Louisa Collins who was executed here in Australia for the crime of murder. It happened a long time ago. We don’t execute people any more.

Louisa was accused of murdering her husbands – two of them – by putting poison in their milk.

Like many girls in those days – I’m talking about the 1800s, before your parents were born – Louisa had grown up poor, and she didn’t have much education. She could read and write, but otherwise, she had no skills. At the age of fourteen, she found a position as a domestic servant. She had to bring potatoes in from the garden and sweep the porch and bake bread for the wealthy family she worked for.

She was very beautiful, and a few days after she turned eighteen, which sounds really old but totally isn’t, she was married off to a man who was thirty. I know, gross, but in those days, it was usually your family who picked your husband and you couldn’t really argue.

She started having children because poor women couldn’t really do anything else. This was the 1870s, and most professions – medicine and so on – were closed to women. It would be years before the University of Melbourne would allow a girl to finish law school. You could find work as a seamstress, but you would earn one-third the male wage and it wasn’t enough to support yourself.

So Louisa had one baby after another until she had nine children in her two-bedroom house, and then her first husband died, and very quickly she had to get married again because how was she going to support them?

Then her second husband died, and they decided to put her on trial for murder.

She must have known that she could not win and yet she kept going.

She did it for you.

I was able to find all this out because some very special people – historians, and librarians, and teachers and archivists – went to the trouble of making sure all the documents form the trial were kept. More than once, I would pick up an old clipping, or sketch, or photograph, and I would think: somebody kept this.

Somebody took the trouble to preserve it, to tuck it away. Why did they do that? Because they wanted us to find it. They anticipated us … me and you, would one day come looking.

They wanted us to see what they saw. So we could examine the evidence, and consider the facts, and decide: did she do it? That’s part of why I wrote the book – so that you could decide.

But I also wanted to know: how could they do it? How could they hang a woman? I don’t mean because she was a woman. What I mean is, Louisa’s case – like all cases – must be read in its historical context.

Louisa Collins was put on trial at a time when women were not under the law. Women could not vote. They could not sit in parliament. There were no woman judges – and no women jurors. The appeals court was all men, too. The premier was a man. The governor was a man. The people who made the laws and enforced them, all men.

The injustice of this was obvious to women in the 19th century. In the days after Louisa was sentenced an enormous number of them – thousands of them – rose up to have their say. They organised petitions. They wrote to newspapers. These women had a point to make – and it’s a hard one with which to argue. A legal system comprised only of men could not with any integrity hang a woman.

If women were to be hanged for the crime of murder, they surely deserved some kind of say in how the system was run?

Surely they should be able to sit on the jury so Louisa could have a jury of her peers?

They surely deserved a vote, so they could have a say about capital punishment?

They knew you were coming, and now you are here, and we should be so proud of them, but also, as you go forth into the world, don’t forget them. Remember them. Make them proud of you.

My book is called Last Woman Hanged so you won’t be shocked to hear the ending. The women who stood up for Louisa couldn’t save her. She was executed.

But the campaign they started for women’s rights didn’t die with her. Even after Louisa died, those women – the early suffragettes – kept arguing for more rights for women.

In September 1900, the famous feminist, Vida Goldstein, came here, to the Melbourne Town Hall, and argued for a woman’s right to vote. She was mocked and taunted, but she didn’t care. She believed that men and women are born equal in rights and dignity and no good could come from keeping one half of the population down.

In 1903, she became one of the first women in Australia ever to stand for election. And again, she came here, to this Town Hall, and she spoke for two hours about the hand that rocks the cradle, and how it rules the world.

She must have known that she could not win and yet she kept going.

She did it for you.

She wanted you to live your life in freedom, and happiness.

And so she fought not for herself, but for you. And one of the reasons I wrote the book was to say thank you to her, and to all of the women who campaigned for Louisa, and for women’s rights more generally, more than one hundred years ago.

They didn’t do it for themselves. They did it for you.

They knew you were coming, and now you are here, and we should be so proud of them, but also, as you go forth into the world, don’t forget them. Remember them. Make them proud of you. 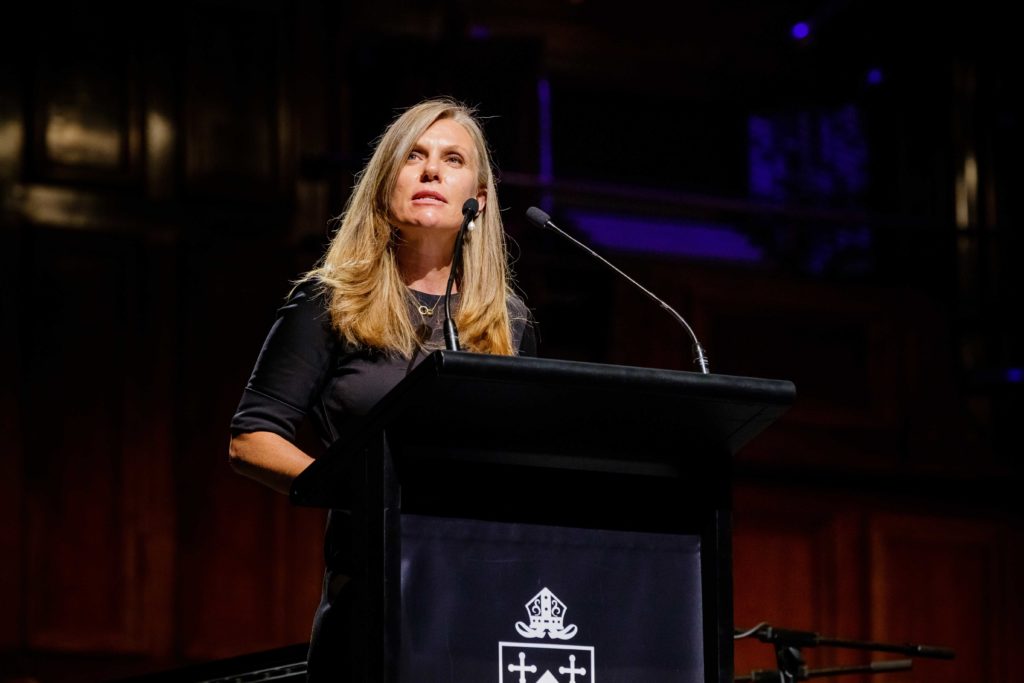