Melbourne Girls Grammar’s House System is built on tradition. For our Grammarians, being part of a House brings a feeling of belonging, a connection that goes beyond year levels and interests.

you HAve SPOKEN, WE HAVE LISTENED

On Friday 8 October 2021, MGGS held a YES/ NO Referendum where current students (Years 4-12) and MGGS alumnae were invited to decide whether to rename Batman House. Results have now been announced and are available at the bottom of this page.

We thank the many members of our community who took the opportunity to voice their opinion and contribute to the history of Melbourne Girls Grammar.

The history behind the creation of each House is one we don’t necessarily know well. Prior to holding the referendum on potentially changing the name of one of our Houses, we thought it was important to go back to the beginning and explore the history of our Houses.

The History of our houses

The idea of a school having ‘Houses’ originated in England’s famous boys’ schools – the ‘great public schools’ such as Eton, Harrow, and Rugby. All were boarding schools with ‘Houses’ that were literally the houses near the campus where the students lived. These were our first houses too – the boarding houses, Morris Hall and Merton Hall – who engaged in friendly competition.

Houses were formally introduced at the School in 1925. There were three of them, named after saints – St Cecilia (the musician), St Hilda (the scholar) and St Joan (the warrior).

Quite a lot of schools were introducing ‘Houses’ around the same time and the impetus was often for sporting competition. However, in the case of our school, it was different. In 1925, Miss Gilman Jones created an innovative middle school where girls were grouped together in the three houses rather than in year level classes and they had greater academic freedom in their choice of subjects. This also enabled the administering of pastoral care, or what today we understand better as the support and wellbeing of students. Gradually the house system was extended to areas other than academic.

The MGGS House System, however, was suspended in the 1950s, only to be reintroduced in 1965. Today, the MGGS Houses are well known:

Named after the early settler who landed on the banks of the Yarra River in 1835. 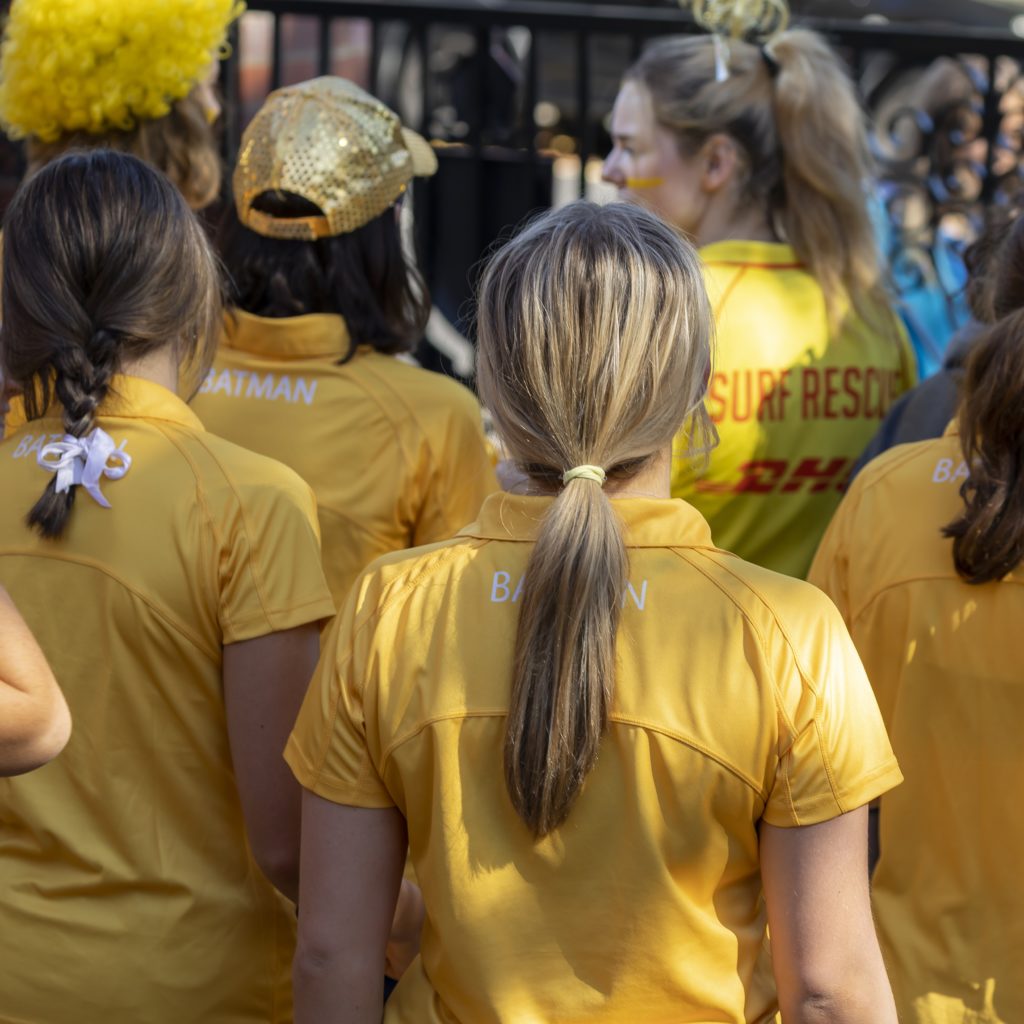 Named after the first archbishop of Melbourne, Archbishop Lowther Clarke [who was very influential in the early establishment of Church of England girls’ schools and Chair of the CEGGS School Council 1903-1920]. 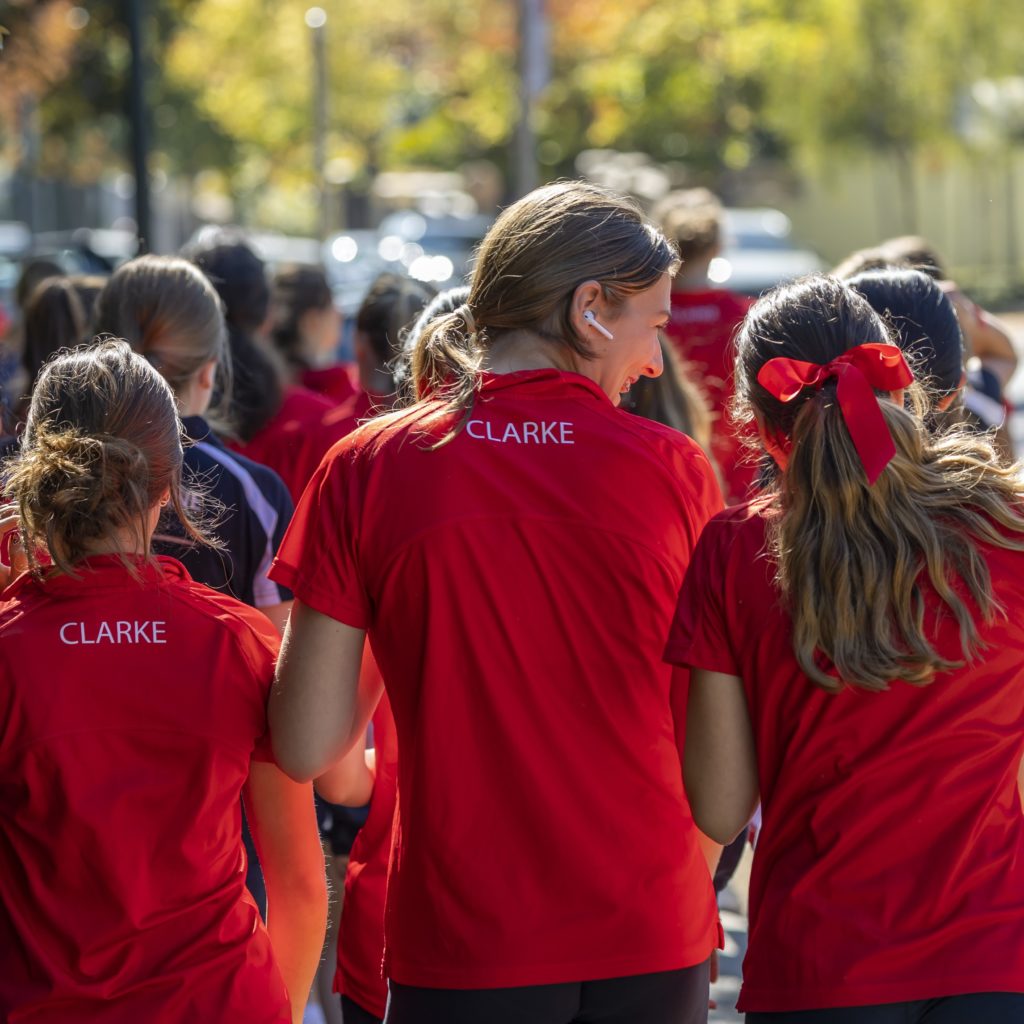 Named after one of the first two Headmistresses of ‘Merton Hall’, Miss Emily Hensley 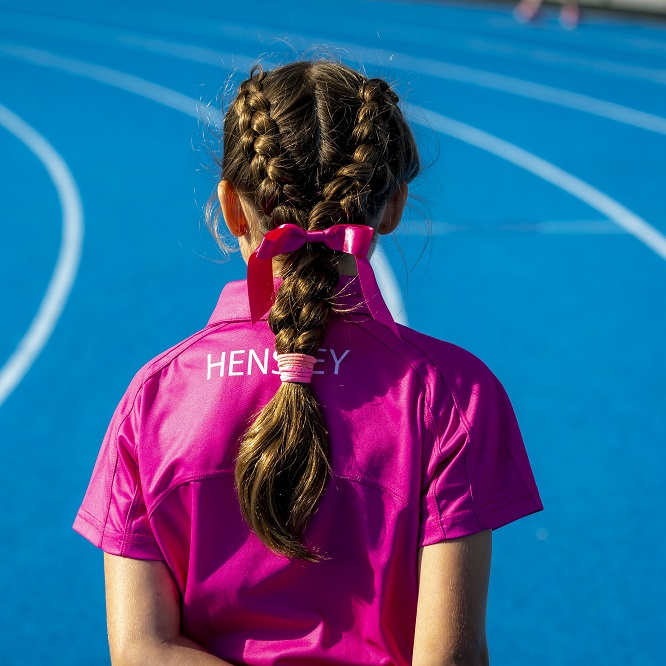 Named after the residence in Domain Road called St Mungo [where the School first began in 1893], renamed Merton Hall by the Misses Hensley and Taylor after the old hall in Cambridge where Newnham College originated, and where Emily Hensley studied in the 1870s. 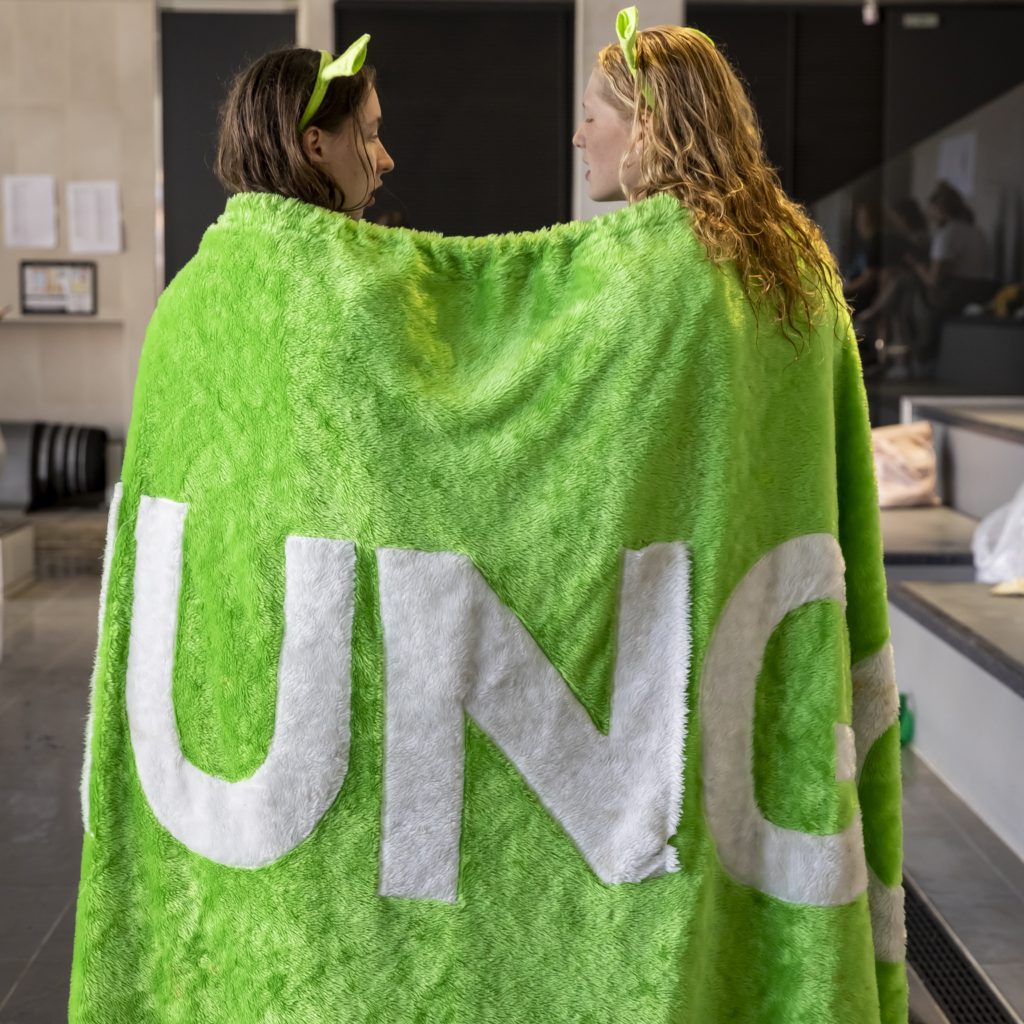 Named after the other of the first two Headmistresses of ‘Merton Hall’, Miss Alice Taylor. 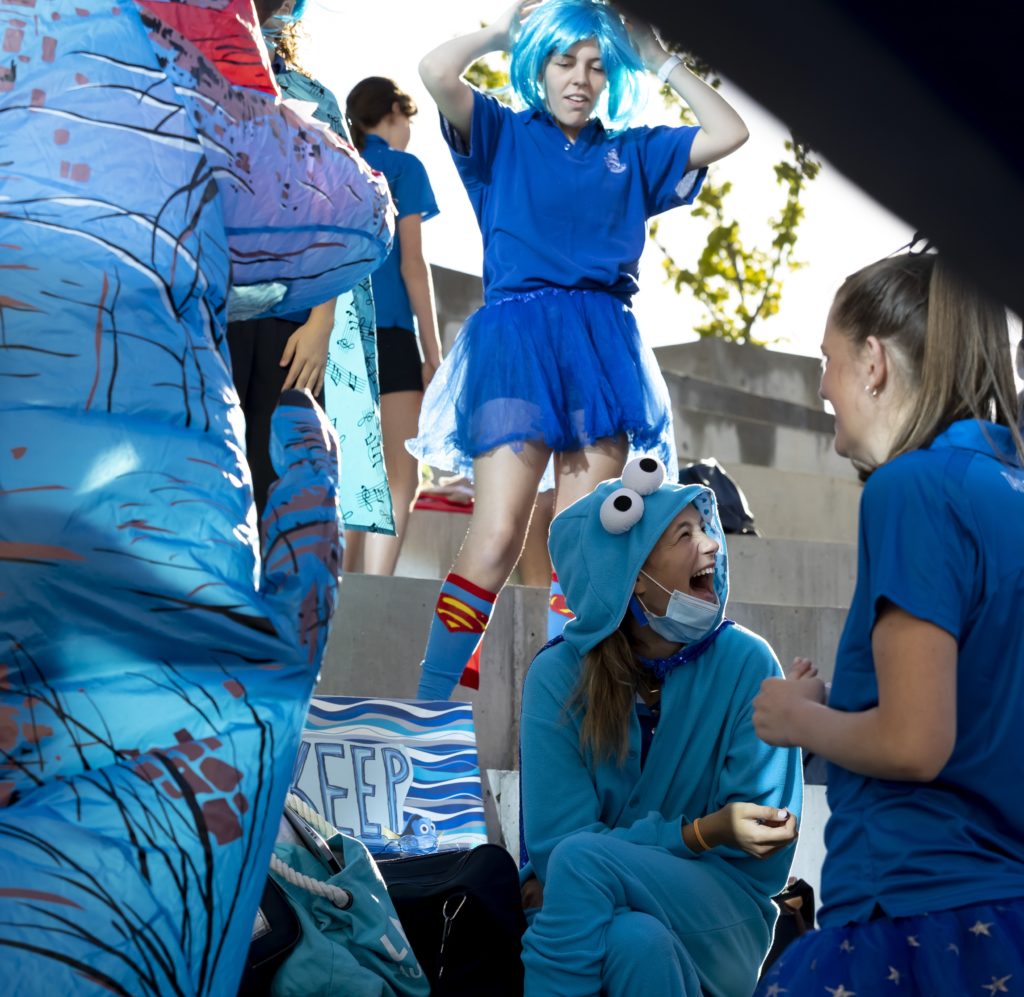 Choosing names for Houses has never been an easy task. Invariably there are lots of ideas and opinions. So, when in 1965 the Student Executive Council (SEC) were advised that the School intended to reintroduce ‘Houses’ they were asked to come up with five names.

As expected, there was considerable discussion among the students then about what names might be used. Someone on the committee suggested that the houses should be named after famous women, but, according to the minutes of the meeting, the idea was rejected because they could not think of five famous women to name them after!

Delving further into the process, we have uncovered that there was community consultation and suggestions of possible names requested. Many options were submitted – names of archbishops, both in Melbourne and in Canterbury, early Victorian governors, saints, pioneers, street names, bridges, rivers, statesmen, politicians, colours, Greek gods, flowers, prime ministers, prominent OGs and former principals.

The options were brought to the Student Executive Council (SEC) who were advised by Miss Edith Mountain, the Headmistress at the time, that names connected with the School might be more suitable. The SEC whittled them down to a smaller selection and finally decided on the two Founding joint-principals, Miss Emily Hensley and Miss Alice Taylor who had not been recognised in naming of buildings as later principals had.

Their next selection was Mungo – as the name of the original property they operated out of – an actual ‘house’ – from 1893-1898. At this stage, the SEC abandoned the idea of Morrell and Yarra.

Lastly, they voted on the four remaining names in their smaller selection – Clarke, Batman, Fawkner, and Yarra, and chose Clarke and Batman by a clear margin.

Henry Lowther Clarke a champion for the education of girls. Clarke was the Anglican Bishop (and later Archbishop) of Melbourne who oversaw the acquisition of the School known as Merton Hall by the Church of England and chaired the School Council until 1920.

When Clarke arrived in Melbourne from Britain in 1903, he was dismayed at the lack of Anglican influence in the education of both girls and boys. Clarke was such an energetic devotee of girls’ Anglican schools that he actually contributed to the running of these schools from his own money.

Historian, Mark Cryle identifies that Batman was a very adept bushman energetic, courageous, ambitious and a capable leader and organiser. In 1835 he led a party of men across Bass Strait from Launceston to explore the Port Phillip district, resulting in the colonisation of that area within a few short years. Batman himself, without much modesty, proposed that they call this new settlement ‘Batmania’. Batman was loyal to those who supported him but an opportunist and a highly conflictual character who alienated many with whom he was associated.

The issue of who from the past gets commemorated and who doesn’t, can be a complex one and subject to changing sensibilities about what is worth celebrating and what isn’t. Today, there has been much controversy regarding John Batman. In recognition of this, the School has undertaken to hold a referendum to assess the sentiment of current and past students regarding the ongoing suitability of the name of this House.

In 2020, our School Captains Helena Wong-Hansen, Scarlet Elkins-Priest, and Sophie Hodge presented to School Council a precis and history of the names of the Houses and questioned whether in a contemporary 21st century setting, Batman was an appropriate name. In their presentation, they eloquently put forward the idea that John Batman was not only the broker of the notorious Batman Treaty but a participant in the Tasmanian “Black Wars” which culminated in the murder of more than one thousand Aboriginal people.

They also made the case that the other House names of Hensley and Taylor (our first principals), Mungo (after the original site of the School, St Mungo in Domain Road), and Clarke (after Melbourne Archbishop, Lowther Clarke, responsible for promoting and funding Anglican girls’ education) were closely tied to the School.  Batman by contrast, seemed the ‘odd man’ out.

They defined that we are not alone in questioning the validity of continuing to honour Batman given the changes in history since he was in favour. In 2018, the Melbourne electorate of Batman was renamed and now pays honour to William Cooper – and our captains put forward that perhaps this is a precedent from which we could learn.

On Monday 12 September, the Principal Dr Toni Meath announced to the School community in Messenger, that there would be a referendum to determine the sentiment of students and Old Grammarians in favour of a name change to Batman House:

I know these issues are sometimes more complex than they appear, particularly when dealing with historical legacy; however, student voice is a pillar of MGGS and the conversation has been continued within the student body led our 2021 Captains, Lilli Ingram, Tiffany Chiang, and Mimi Barnes. Scholars of representations of Australian History often refer to “moral moments” that occur at different points in time, perhaps now is one of those.

In the same week, the students watched the video produced by Historian Mark Cryle and Professor Erica McWilliam AM (author of the imminent publication of MGGS’s history) that tells the history of the School’s Houses.

On Thursday 7 October 2021, we invited all eligible students and past students to vote in a referendum to voice their opinion on the change of name for the Batman House. They were given 24 hours to cast their vote.

The result of the referendum

We are thankful to both our alumnae and current students for participating in the referendum in great numbers. They took the opportunity that was offered to voice their opinion and contribute to the history of Melbourne Girls Grammar.

The School engaged independent external auditors to verify the process and results via an Agreed Upon Procedure. The auditors undertook various investigations as part of that engagement and reported through to School Council details of their factual findings. The report gave School Council confidence in the reliability of the process and accuracy of results.

The result of the Batman Referendum was quite clear. An overwhelming majority of students and Old Grammarians told us they were in favour of changing the name of the Batman House. This was reflected in the votes from our current and our past students who represent many generations of alumnae.

Now that we know the direction our community wants to take, we will begin the process for choosing a new name for this House. This will be extensive and will require us to consider many options. This process will start in 2022.

Any questions can be directed to community@mggs.vic.edu.au

(1) The Hensley House colours were also changed by student vote in 1983 through initiatives taken by then House Captain, Rowena Mytton (Watson) and Vice Captain Kate Shea. They were changed from white to pink.

(2) From the School Notes and with input from Mark Cryle, Historian/Author, and Pip O’Connor (Farrer,1965), School Historian.